Author of The Big Wish

Connect with this author 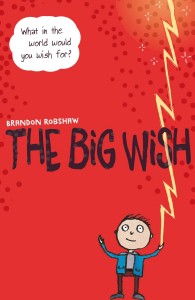 Brandon Robshaw studied English literature at Wadham College, Oxford University. He did a PGCE at Swansea, has been a schoolteacher and a university lecturer, and currently lectures in Children's Literature for the Open University and in Writing for Children at Westminster University.

He has written several books for children, including some under the name of Adam Blade for the Beast Quest and Sea Quest series. Brandon has an MA in Philosophy and is doing a part-time PhD with the Open University. He sings in a choir and plays the piano and ukulele (not very well). He enjoys running and has completed a number of marathons.

He has lived in Oxford, Swansea, Paris and South London, but now lives in Walthamstow, East London, about a mile from where he was born, with his wife, three children and a dog.

Brandon Robshaw in the news

April has been a really exciting month for us at Chicken House HQ - not only have we announced the winner of the 2015 Times/Chicken House Children's Fiction Competition, but we've also got four brand new books publishing!